19 replies to this topic

*pokes mic* Is this thing on?

Okay well, Is there any Soul Eater fans out there? I mean, I seriously can't find ANYONE.. I need someone to rant with.. someone anyone.. and if you haven't heard of Soul Eater...GO AND WATCH IT!

Couldn't finish the anime, manga's good though. I like the style. Blood Lad, too. 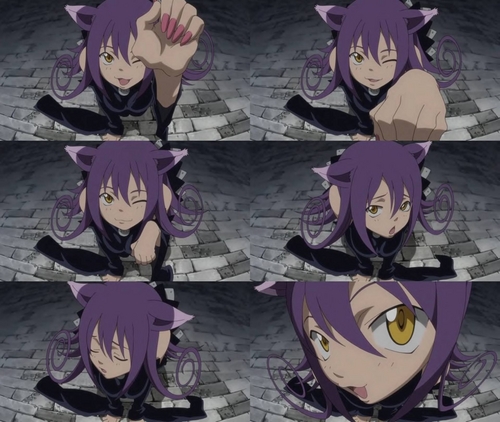 Admin here, no idea about soul eater. Just stopping by to say your sig is the most awesomely Canadian thing I've seen.

@NoDanico- You see, I'm the complete opposite. I've seen all the anime seasons, but alas, I can't mind the manga. Soul Eater is very much my style: Dark, demented, mysterious, and a hint of magic. Hmm, that sexy combination is all me! You may like Blair, but I feel she's one of the weaker developed characters. (Pfft, you just like her boobs.) Why couldn't you finish the series? It ran so deep.. the plot AND the side stories. It was a masterpiece in my eyes... but than again... I see the world in a whole different perspective.. it seems.

It seems we have a lot of Canadians here.

Look forward to it, all of our Canadians are awesome.

I love lady boobs, I won't apologize for that. I know it's not a popular opinion among men, but I will not, cannot, apologize for lovin' titties.

And catgirls are my thing, if a show has them, instant +3 points. I agree, Blare is a tertiary character added for boobies. But catgirls themselves don't have to be boob machines. Moe pettanko can be just as endearing with a pair of fuzzy ears.

Hey! Story time.: An ex of mine used to subscribe to the female version of Shonen Jump, Beat something? It was filled with girly comics I couldn't care about. So, one day, as I'm sitting on her bed, waiting for her to get ready, from the bathtub she yells, "Oh, there's a comic in [Beat something] that you might like. It has a cat who's a witch who turnes into a catgirl." She knew my fetishes well.

I gave the first two books a read and decided it would probably turn into another girly rag that I would dislike, so I didn't read past that. A year or so later a friend of mine mentions he had started watching the Soul Eater anime. I laughed and said, "Yeah, that girly comic [Girl's name with a C] used to read? You're watching that?" He shrugged and said he did. I made fun of him, a lot. A. Lot.

I gave it a shot, dubbed, shotgunning the first twenty five episodes one night. The next day I gave the comic a go, reading it online. I read past where I was in the anime and never looked back.

Anime is fine and good, but i prefer to read the equivalent of five episodes in the time frame of the one.

Soul Eater is very much my style: Dark, demented, mysterious, and a hint of magic.

I agree wholeheartedly on this. That weird gothic-esq style that reeks of cool without being mainstreem gothic-esq. There has to be a better term for that. Also, oxford comma-esq, smexy as hell.

lord of the lols

lord of the lols

I need to finish that.... Yet another thing added to the list.

Because if you don't do it, who's going to?

I loved the series. My favorite character would probably be either Stein or Tsubaki

Also, in regards to RELICS comment. I had absolutely no problem with the ending although I have heard it deviates from the manga but that just gives me something new to look forward to when I finally read it.

Never seen the anime, though I am an avid collector of souls, which could be eaten at any time I suppose.

I saw your signature on imgur the other day, it was and is awesome.

Fellow Canucklehead here by the by, and there are several others milling aboot.

Decent anime, did not particularly love the ending.

@TreeLife Huggin' Cookies!!!: Would not mind seeing some Soul Eater. We haven't discussed basic plot, have we? *scanning page* Sooooo . . . what's it about?

Anime where people fight with weapons made from other people, killing monsters and collecting their delicious souls. Cats become smexy ladies. Jazz demons appear. Shenanigans ensue. It's worth a watch.

Stole the words right from my mouth

I watched the anime and was disappointed by the ending. I promised myself I would read the manga but never got around to it.

I don't remember how it ended, I'm pretty sure they played the crappy "Unstoppable Power of FRIENDSHIP" card though, which turned me off

All in all though, I liked the characters, their interactions, and the general pacing of the show was alright

Yeah I'm a fan of Soul Eater. It's one of the very first anime's I've seen. Never got around to reading the manga though.

Maybe I'll check it out one of these days.

I really got in Soul Eater last year, I named my cat Crona tehe!

Wasn't there rumours there was another season being released?

I really got in Soul Eater last year, I named my cat Crona tehe!

Wasn't there rumours there was another season being released?

Apparently they just announced the Soul Eater Not!(Side Story) anime. Also, the manga just ended this year so I suppose the could go back and redo it like Fullmetal Alchemist: Brotherhood

I'm reposting this because I figured out how to make the video embed in the post!   :B