Bonzailorentzon hasn't added any friends yet. 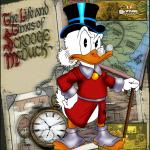 Odysseus. I loved the man as a kid. Strong and powerful, yet he used his mind to trick his enemies. Charismatic and cunning, he was definitely a character I emulated.

I read Sherlock Holmes as a kid and decided I wanted to be like that. I started paying attention to people’s faces, their mannerisms, the way they talked. It was my first anthropological study. I have became pretty good at it, not on Holmes’ level or anything, but I can usually guess what a person is thinking, I can guess what my friends will do in a certain situation. It’s became a game of sorts, when a friend wants to gossip about someone, I’ll make a prediction. About 7 out of 10 times I’m correct. (See the Kant quote in my sig)

The thing about Holmes, as with so many other heroes in different ways, is his incapability of having a "normal" life. Apart from say Spidey, who has to protect those he loves, Sherlock doesn't want a life different from the one he has, or be something else than what he is. But there is a very dark side to Sherlock, that I found when reading him almost endlessly for about a year. When you read him you begin to act like him, develop amateur versions of his capabilities which is Awesome because it can actually be done! But I found that it's easy to also begin feeling a bit like him, question social capabilities and need for "superficial relationships and conversations". What I'm getting at is that Holmes is one of the heroes whose powers are actually possible in our world to achieve. And that "reality" of him, is probably his best quality, at the same time as it makes it questionable to want to be like him - in case one would actually start becoming like him.