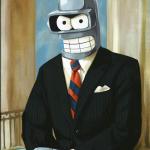 
4 replies to this topic

I never watched either of these shows. Which one do you think is better and why?

If nerdforum.org was a city, it would be a ghost town from the future.

SG1 was good for the first few seasons.. then it was just drawn out

It's hard to say. They are two very different shows, so it's like choosing between a cucumber and a banana. Battlestar Galactica is about robots who are attempting to find any and all humans to kill them right after they destroyed earth. The humans in the show spend time trying to escape and rarely fight against the robots. It's a very dramatic and semi-dark style show. Stargate SG-1 is about wormholes on Earth that lead to portals into different parts of outer space. Humans encounter both friendly and hostile aliens throughout. It's more about exploration and adventure. The characters are very interesting, but the plot can occasionally seem dull. Overall, still a fun show.

Both are great shows. I would say SG-1, but only because of the first two seasons. If you compared the later seasons of SG-1 with BSG, then it would be a tie.