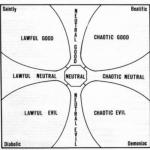 Which alignment or alignments based on the D&D Character Alignment system, are you?

26 replies to this topic

I'm Neutral Good according to some random ass quiz I took a while back. Though I'm with Jazz in that I think I'm more Chaotic Good as well. However, I differ in that I like the idea of freedom....true freedom. Freedom from oppression, government, and inherent evils. Sadly that is a utopia which will never exist. I could elaborate extensively, but that'd derail this thread big time. Bottom line is that I think morals are purly self governed, with influence from outside sources. I don't need a book, be it a law book or a bible to tell me that killing someone is wrong. But stealing on the other hand, yea, an outside source will come into play....such as the law, or seeing someone's reaction to the theivery. I also understand some laws to be insane, yet I still obey them simply because it doesn't apply to me (pot). Others, yea, they get broken (piracy). My morals are my own, partially influenced by the church (as I converted to athiesm), partially by the law, partially by my peers, and governed by myself.

Chaotic good, good morals, but thats doesn't mean I follow the rules. But I want to try a darker character

Good and evil are constructs so is law. so true neutral is the only real alignment.

Good and evil are constructs so is law. so true neutral is the only real alignment.

The question is moral in nature. To one person, an act is evil. To another, it is good. Separating groups based on the good/evil spectrum is flawed because they're different depending on how the viewer perceives them.

For example, a group of heroes enter a dungeon, and are confronted with a horde of kobolds. They slay the kobolds, because they are evil creatures who attack anyone who enters, and have killed many travelers and would-be adventurers. They committed an act of good by ridding the world of this evil presence.

On the flip side, the kobolds are not particularly intelligent, but live a sort of pack life. The dungeon is their home, and they fight to protect it from invaders. Unrelenting, these so-called adventurers traipse into the kobolds' domain, laying waste to what they have built, stealing the precious oddities they've amassed over the years. And so they attack. They committed an act of good by protecting their home, and the lives of the baby kobolds and what-have-you.

Not to mention that even people who don't follow societies laws still have some sort of code that they live by. Others may find that code choatic or destructive but it is still technically personal law.

I don't know, really. I'm a pretty empathetic guy and want what's best for people, but I'm too passive to stick up for myself or others. I'm also extremely paranoid and cynical about most things. So whatever that would make me.

I feel that we need to discuss the actual meaning of the alignments.

Probably most real people would be good or neutral. Few people are actually out to get the world, and those who are are usually millionaires, politicians, or hiding in an alley. The rest of us regular people are good and neutral. Another thought: Does a good character do what they think is good, or what is objectively good. Since there is no such thing as objectively good, the answer must be the former, unless goodness is defined by what the player defines as good. If a character commits genocide against a benevolent race because they think they are ridding the world of an evil, does that make them good?

The lawfulness spectrum is more easily disputable. Is a lawful person a person who follows the laws of society, the literal laws (like, the police kind), or their own laws? Is a lawful person somebody who does what other people tell him to, or is he a person who does what he tells himself to do: what he feels is true or right. One might argue that the latter example is simply the good-evil spectrum, showing if a character does what they think is right. The way I'm thinking about it, lawfulness could be compared to OCD. Although people with OCD are not necessarily trying to do what the think is right, they do things in a certain way, following their own laws. If a character commits a crime he knows is evil because that is simply the way he has to do things, for his own reasons, is he being lawful? Perhaps a chaotic character is just one who ignores reason and does whatever they feel like doing at the moment, whether it be for good or evil.

Thinking about real life again, where would most people stand on the lawful-chaotic spectrum? If lawfulness is simply how willing a character is to break laws, I think it's fair to say that the average DnD character breaks more laws than the average human on Earth (or at least in America). People generally don't break any laws at all. If they do, they are often put in jail. Does this mean that the lawful people are all around us and the neutral and chaotic ones are all in jail?

With that said, I would probably be lawful good. I try to do what is right and I certainly cannot recall breaking any laws recently. I want to say that if I were turned into a DnD character in a DnD universe, I would be neutral good. Although I don't often break the government's laws, I don't so easily take orders from others.